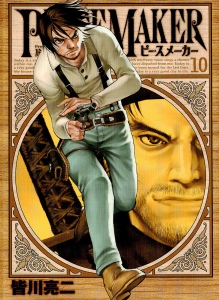 Description: Tells the story of a lone gunman named Hope Emerson, the son of legendary gunfighter Peace Emerson. Known for the Spot Burst Shot, a technique that involves the firing of multiple bullets at a rapid pace while fanning the revolver’s hammer. Emerson gets drawn into a mysterious conflict when he defeats a gunslinger named Hans “Grim Reaper” Giles in a duel after surviving a gunshot due to his bulletproof jacket. Hans had been part of a private mercenary force known as the Crimson Executioners, raised by millionaire Phillip Crimson.